May 14, 2011
This is the third in a series of blogs about getting organized so I can finish two projects I have completed first drafts for (one a novella, one a full-length novel), and the second half about organizing plot lines.
Wondering about the origins of this series? Read this blog: Getting Organized.
Part One: Tracking Characters and Part Two: Plot Monster, Part 1

The first half of the Plot Monster revolved around creating an outline for each part of the novel and novella (the process of which was finished this week).
This Plot Monster installment involves those outlines, but to a lesser degree.

I used the outlines to determine the main plot and the sub-plots surrounding it for the novel and novella.
For the novella, this was simpler to do, as it is shorter, and - if the outlines are anything to go by - has fewer characters and settings than my novel. 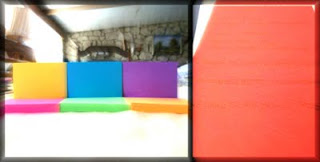 Once I figured those out, I picked colors for the sticky notes that would mark developments in each of the plotlines, and wrote them down on one of the lined sticky notes.
Alongside them, I noted which color.
Since the novella has seven plot lines (main and sub), it seemed easier (read: less wasteful of paper and space) to use just one note than to write each down on its individual color. 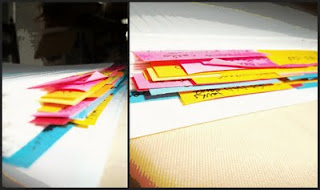 Then came the time to mark each plot point.
I put each marker on the page the point occurred, as near to where it occurred as I could.
Each marker has the plot point it represents written on it.
Now when I want to look at plot lines, I have the ability to flip right to where the related points happen as they happen in the story.

Convenient, isn't it?
I thought so, too

Thoughts on the process:

Outlining each part was the roughest part of the Plot Monster.
Once the outline was finished, it was much easier to identify what was going on where, and to mark the events from there.
It also made it easier to identify the plotlines which were naturally arising, and the ones that were forced into existence.
This will be a tremendous help as I move deeper into examining the plots within the stories.

I could probably better set the stage for settings...
Haha, get it -
Set for Settings?

Okay, I tried.
Settings are what I will tackle in next week's blog, so stay tuned!