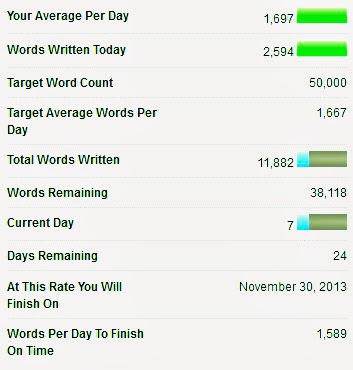 Yes, this is what the end of the first week of NaNoWriMo looks like for me.

I know what it looks like. I'm on track to hit 50k (barely, but I'll take it because earlier tonight, the NaNoWriMo website was predicting I wouldn't hit 50k until the second week of December). I made a lot of progress the first two days, skipped days three and four, only got in about 800 words day five, and took day six as one of my scheduled days away from working on this beast.

Am I behind on my personal goals? Yup. But I'm still in the game.

Fortunately, the act of showing up and trying is enough to keep me there. I'm more than a little bit thankful for that.

Even if that weren't, though, there is that little matter of knowing I've fallen far further behind by this time in the past and still been able to come up with a win in the end. I have two Winners Certificates to prove it (which I am going to frame and hang up on my writing wall.... someday).

Week two starts tomorrow. I can't wait to see where it goes.