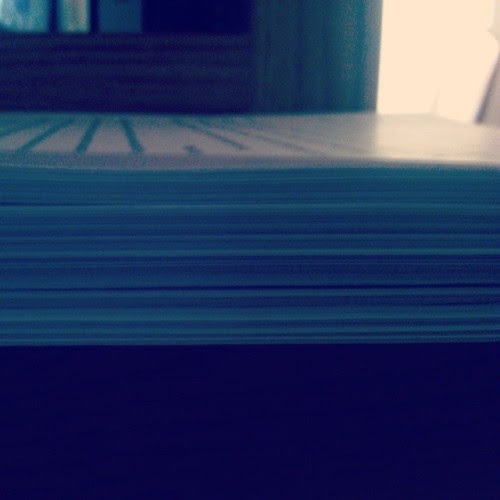 I went to bed last night with a list of things to do today (not so) neatly listed in my head.
Laundry. Baking. Straightening the house. Quiet time.
Not one of the things on my list had anything to do with the one-half to two-thirds complete first draft of a novel sitting on my laptop's hard drive.

I hadn't touched my novel since the beginning of December.
Yes, friends, as crazy as it might sound, I intentionally took a seven week break from a first draft that has yet to be completed.
I also intentionally didn't touch any other non-work-related writing projects in that time period.
The holiday season is always especially crazy, and I've developed this ridiculous idea lately that if I want to breathe real life into the stories I write...
Well, I need to lead a life that breathes real life into the lives of people around me.
So I took some time to let the people, places, and things that breathe real life into me do exactly that.
(I'm not going to make any promises, but there might end up being a blog about that later.)

So, when I woke up this morning, expecting my to-do list from last night to click into my head just like I left it when I fell sleep.
Quiet time was the only thing on the list that had rewritten itself while my brain took its well-earned siesta.
In the place of everything else on the list was one thing, and that one thing was urgent.
Print the manuscript.

And that is what I did.
I'm writing this blog and glancing over every few minutes at the entertainment center, where 164 pages of not-yet-finished awesomeness is currently resting.
It is the tangible, physical evidence of all the blood and sweat and effort I put into a story I pray will see more light of day than just the type that streams through the kitchen windows.
Also, that thick stack of pages reminds me of how the hopes and dreams I don't always know how to properly express can come to life.

For those of you who are wondering if this will ever be finished... it will.
It is the sequel to a novel I have already written that has a nearly finished second draft - meaning I have much incentive to follow through.
One of those things I will be beyond excited to announce when the time comes, but until then... knowing there are at least 164 pages of unfinished awesomeness floating around will have to suffice.
goals NaNoWriMo NaNoWriMo 2013 priorities Seasons of Life stories