Up for review this week is: 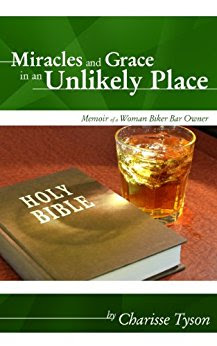 Miracles and Grace in an Unlikely Place:
Memoir of a Woman Biker Bar Owner
Charisse Tyson (website), 2013. Lifeanew Publishing, 1st Edition*
Find it where I found it: Amazon.com Link

Summary:
Miracles and Grace in an Unlikely Place is a memoir written by Charisse Tyson, owner of Johnny's Bar and Grill in Hollister, CA. If that bar sounds familiar to you, it might be because an incident taking place there in 1947 was the inspiration for the 1953 movie The Wild One, staring Marlon Brando. The story in this memoir, though, is one of how God met Tyson where she was and transformed her life (and her marriage).

Why I Read It:
Besides the part where I found it for super cheap (maybe even free) on Amazon right before I left for a mission trip, and was looking for a memoir or autobiography of a Christian woman to read on the plane? Hmmm...

It's because I love hearing (and reading) stories about how God meets people in unlikely places. A few years ago, He allowed me to be part of the story of how He met a woman named Esther where she was. In a bar, halfway around the world from where I sit now at my computer. One of the truths I've come to know about God is that He doesn't wait for people to be in safe and saintly places before He meets them. He meets them in the places they are - whether people think He's likely to be there or not.

Opinion:
For me, the writing style wasn't as polished as it could have been, but it doesn't change that Tyson's story is intriguing and compelling (though some spots did pop me out of the story for a few moments because of the writing, I do admit). The bones were good, though, and that was enough to keep me going to the end, which was a huge payoff. No regrets reading this one.

Many Christians I know have a testimony of how they grew up in the church, grew up loving God, but lost that love sometime around their late teen/early adult years. Years, sometimes decades, later, they find God while they are in less than optimal circumstances and fall in love with Him all over again. For Tyson, it was when her husband told her he wanted a divorce in the middle of a marriage counseling session. The bar was a major pressure point in their relationship (Tyson becoming too wrapped up in and controlling of the operation of it, and his alcoholism and the ease of access he had as a more silent partner in the bar ownership), but it also became a part of the story of how God redeemed them and their marriage.

I do love me a good redemption story, and this one satisfied.

Conclusion:
Literary masterpiece? Nah. But redemption stories are always worth hearing. Especially the ones that happen in places and under circumstances that should be the most unlikely. There are no limits on where God can meet people, and I think this memoir is a fantastic reminder for the times we choose to forget.

*Please note, this is a review of the first edition - the author released a second edition
in March of 2015 titled Born Again in a Biker Bar: A Memoir.
If you're interested in the more recent edition, you can find it here:
Amazon.com Link