Brevity Is The Key (52 Weeks of Books Challenge Week Three) 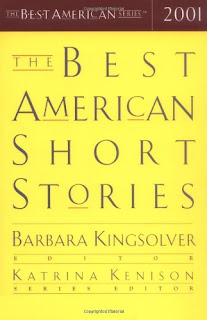 Why I Read It:
I love a good story, whether it is as short as a flash fiction story or an entire series of novels. Anthologies like this give me a lot of stories in a smaller space, and they give me the chance to discover authors I've never read before that I never would have found on my own. I stumbled onto this series because the previous year's anthology was assigned reading for an English class I took at community college. While I wasn't in love with all of the stories in the 2000 anthology, I fell in love with all of the possibilities of an anthology's contents.

Opinion:
In my opinion, most anthologies have some stories that are hits, and some stories that are misses. "The Secret of Bats" by Jess Row was a hit for me. The story flowed well. I had an easy time relating to the main character and their feeling of being an outsider in the culture they're in. Alice, a young girl and student of the main character, and her interest in bats had me smiling for a lot of the story. I found a lot to relate to with her as well - her isolation because of family circumstances beyond her control and how it affects her.

The story that was a huge miss for me in this anthology was Roy Parvin's "Betty Hutton". I couldn't relate to the main character at all, and the writing style just did not hold my interest. I think the problem for me was the  amount of time Parvin spent inside of the main character's head. I know I do it sometimes in my own writing, and it always makes me grimace when I read through the story at a later date. I might have gotten a third of the way through "Betty Hutton" before I decided it was not worth the time to continue, and moved on to the next one.

Conclusion:
One of my favorite things about short story anthologies like this is how I get to check out a lot of writers for the price of one book. I've found some stories I've fallen in love with (like Kevin Brockmeier's "The Year of Silence" in the 2008 anthology), and some I haven't been able to stomach. They've also allowed me to start a list of writers to follow, as well as a list of writers whose works I probably want to stay away from.

Plus, a short story anthology like this one gives readers the ability to more easily set the book aside without that weird feeling that comes along with setting a story aside because you don't have time to finish it.

52 Weeks of Books Challenge? What is that? What book is Cat reviewing next week?
Read up on it (and the reviews) here: http://www.catpollockwrites.com/p/blog-page_30.html
52 Weeks of Books anthologies book review fiction Short Stories