Still a week behind, but I am working on catching up. I promise. 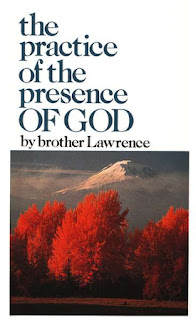 The Practice of the Presence of God
Brother Lawrence. 1982, Whitaker House

Summary:
The Practice of the Presence of God, considered by many to be a Christian classic, is a collection of recorded conversations with, letters from, spiritual maxims spoken by, and short biography of Brother Lawrence. Brother Lawrence was a lay brother at a Carmelite monastery in Paris in the 17th century. He worked in the kitchen of that monastery, and he caught people's because of the intimacy of his relationship with God. This was developed through hours spending practicing being in the presence of God.

Why I Read It:
On my first mission trip outside of America, my team spent a month early on in New Zealand. Our ministry contact was a rad American like us, and he shared a couple of chapters out of this with us. It had enough of an impact at the time for me to want to finish the entire book at some time in the future.

Opinion:
In terms of effect, The Practice of the Presence of God has been huge for me. There's a lot to take away and I am still processing what I've learned, but I plan to write a post about it soon.

On a more practical reading level, the updates to more modern language usage was helpful because it was easier to understand. The conversations, letters, and spiritual maxims were each grouped together, which made it easier to read. It also helps that Brother Lawrence does not seem to take long to get to his points. It was a refreshing change from some of the books I've been reading this year. Don't get me wrong, because I love a well-layered and well-documented build-up to a point, but sometimes I need a writer to get to the point quickly.

Conclusion:
Brother Lawrence is known for his practice of being in God's presence. His example proves that while  seeking out the presence of God takes much time and effort at first, it will always be worth it to do so.