Yeah, this review should have been up on the blog last week. Oops. At least I got it up before the end of the month? 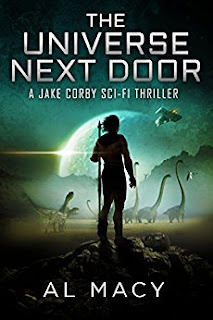 Summary:
The Universe Next Door is the third in a series of novels about Jake Corby, a former FBI troubleshooter who has saved the International Space Station from being shut down and the world from alien invasion. In this installment, Jake, his dog Boonie, and his 83-year-old grandmother-in-law are pulled into a parallel universe where dinosaurs never went extinct, and Earth is ruled by a species of dinobirds. Why? A universe collision is imminent that could wipe out both universes, and the dinobirds need Jake's help to prevent it.

Why I Read It:
Here's the legal disclaimer here that should have come at the beginning, folks. I received a copy of this book from the author in exchange for a fair and honest review.

Opinion:
The Universe Next Door, despite its status as the third in a series, was written to function as a standalone novel. It is set after (and pulls some from the events of) previous installment Contact Us. That could have made it difficult to understand, but the author brought in enough information from previous installments to make it work. But... the events of Contact Us were integral enough in the story for me to feel like I had missed out on something by not reading it. That could be a testament to the overall strength of the series as a comprehensive story. I'll know for sure if I ever get around to reading Contact Me or The Antiterrorist.

What was problematic for me was... well, the format for The Universe Next Door. It breaks down into three acts. The first takes place almost exclusively in the Dinobird Universe, and it felt compressed. The second act starts when Jake Corby goes back to get his universe to start working on its part of the dinobirds' plan. It, like the first act, feels compressed. The third act is where the two universes reconnect, along with a third universe where the catalyst event for Contact Me goes a different way. Like the other two acts, this act feels compressed. What I'm saying is that each act was its own story, and The Universe Next Door could have done well as a series of its own.

Elements in the story that worked well for me - Corby's interactions in the first act with the dinobirds. There was a certain amount of humor to it, but the writing captured the seriousness of the situation. Also, the development of Corby's relationship with Marie, his grandmother-in-law, while they are left to fend off the dinosaurs, felt honest and true-to-life for the situation they found themselves in.

While this was far from a stroke of literary genius, it was a pleasant and fairly quick read for those who enjoy parallel universe stories.

Conclusion:
I am a sucker for stories about parallel universes. Might be why I loved the television series Sliders so much in its heyday, and why some of my favorite episodes from the Stargate franchises were the ones involving parallel universes. There is something about exploring the answers to the what if questions in life, whether the what if is a universe where dinosaurs survived or just a different food choice for breakfast.