Getting Your Groove Back (52 Weeks of Books Challenge Week Nineteen)

Maybe I should have titled this blog, "How Dalinar Got His Groove Back".? *shrug*

Be warned - this one is in the epic fantasy genre, comes in at just over 1,000 pages, and the summary is going to make this a longer post than normal. Also, spelling and grammar checks hate me right now. 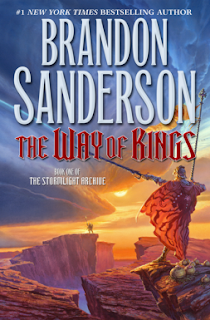 Summary:
The Way of Kings is the first book in Brandon Sanderson's The Stormlight Archive series, which is one of a number of series in the Cosmere Universe. Yes, in case you were wondering, this is the author of the Mistborn series, and the guy who was tapped to finish Robert Jordan's The Wheel of Time series after Jordan passed away. It is set on a world called Roshar, which is full of stone and storms (yes, I'm channeling the summaries I could find elsewhere here), and on the brink of a massive war between highly splintered factions of humanity and an enemy of old known as the Voidbringers.

The major characters are:

Why I Read It:
I asked for recommendations before my trip to Kenya at the end of last year. A friend from college suggested it.

Opinion:
Honestly, I'm still forming an opinion of parts of The Way of Kings, and it might take months for me to articulate those opinions fully. I don't read a lot of epic fantasy. The writing is as dense as the history books I read, but I don't get to skip a quarter to a third of the book because they are full of citations from the text. That said…

Sanderson's done a masterful job of making me care about what happens to Kaladin, Dalinar, Shallan, and Szeth. There were parts of each character I really connected with. When the moments of major impact in the book came, my emotions were running so high I could have thrown it up against a wall if I'd been reading a physical copy. So, that was well done.

Also well done? Overall logic and flow of the story, with one caveat. That caveat?

The interludes. They do serve the function of allowing the reader to rest for a few moments after some of the major moments of impact, and there is information in them that helps clarify some things going on with and around the main character. But… they also popped me out of the story. Instead of making the book hard to put down, they made it easy for me to set it aside and come back to it another time. I started reading The Way of Kings while I was in Kenya, but it got set aside for six months because I hit the first set of interludes and stopped caring about the story.

One other thought about The Stormlight Archive series is that the overall series arc (splintered factions of humanity against an enemy no one thinks is coming anymore) feels a lot like another epic fantasy series of books that has been turned into a television series. George R.R. Martin's A Song of Ice and Fire (Game of Thrones being its TV adaptation), in case you were trying to guess the answer. Different approach, but similar arc.

Conclusion:
While The Way of Kings had some problems, and some similarities to another very popular epic fantasy series, it was well worth the read. I'm not much of an epic fantasy reader, but I understand why people rank Brandon Sanderson's works as examples of mastering the genre.