Just wanted to let you know that while this is a book review, it is not part of the 52 Weeks of Books Challenge. I thought I might dip my toes into the world of writing reviews for more recent releases and see how it goes. To that end -

Disclaimer Notice: I received a copy of Dark Deception from Bethany House Publishers in exchange for a fair and honest review. Nothing more, and nothing less. Also, this is a little late as life things have happened, but hopefully that is forgiven. 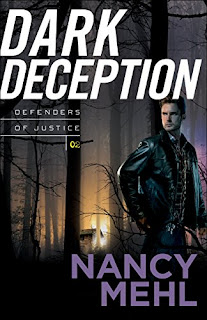 Summary:
Dark Deception is the second in Nancy Mehl's Defenders of Justice series. Several years being attacked by a serial killer (and surviving while her twin sister was murdered), Kate O'Brien is in the witness protection program, and has settled into small-town life in another state. New evidence comes up that could exonerate the man previously convicted. When she is called upon to testify in a new trial, she only agrees if Tony DeLuca - the deputy marshall charged with protecting her during previous trials - is the one to escort her back. He takes the assignment, which turns out to be far more than he or his bosses bargained for when Kate is kidnapped and her safety threatened.

Opinion:
While it probably will not rank on my list of all-time favorite novels, I did enjoy reading Dark Deception. Character and setting development slowed things down considerably at the beginning, but I was able to forgive it because when the action picked up in the second half, I could understand and keep up with what was going on.

The characterizations were a highlight for me in this book. Kate is a real and relatable character who struggles with many emotions I would probably feel if put in similar circumstances. What I love about Kate is her strength, her willingness to face down her considerable fears, and (most of all) how she does not pity herself or paint herself as a victim. Given what Kate has already been through and finds herself facing as the story moves along, it would be easy to let her fall into that mentality, but Mehls does not let that happen.

Tony is also a well-developed character, and while it is clear that one of the story's subplots is his growing attraction to Kate, the romance does not take over the story (which I appreciated quite a bit).


I'll be honest and say that I've had a lack of faith in Christian fiction for quite some time now (which I should blog about sometime soon). While this novel isn't perfect, it is a giant leap in the right direction for me. I look forward to reading more from Nancy Mehls in the future.