A day late, but hopefully not a dollar short? 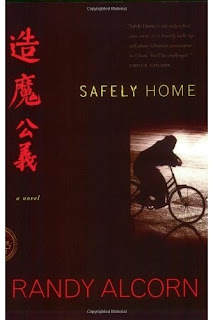 Summary:
Safely Home is the story of two former college roommates - American businessman Ben Fielding and Chinese keymaker Li Quan - and what happens when they are reunited twenty years later in China. Ben was a Christian in college while Li Quan became one while he was there, and one has chosen to stay with it while the other has drifted away. Both have difficult choices to make in their time together; choices that have earthly and heavenly consequences.

Why I Read It:
Momma dearest passed it on to me.

Opinion:
The premise of Safely Home is intriguing. What happened to my old college roommate? The one that was so weird when I first met him and became one of my best friends by the time we graduated? In the world before the information superhighway so freely available, communications took so much more effort - especially when one roommate was returning to their home on the other side of the world, in a country where speaking directly about matters of faith and belief could get them into trouble and both roommates were Christian. As Safely Home illustrates (maybe too well), it is a situation where contact is lost far too easily.

I wish I could say this was a quick, enjoyable read, or that I could connect to the characters, or something. The sad fact (for me) is that this one is another I'm marking finished and passing back because I could not get to the end. The characterizations generally fell flat, with the American characters especially relying on stereotypes that aggravated me as a reader. While parts of me were able to connect to what the Chinese Christians experience, I didn't really care about Ben at all even though the story is supposed to be about his faith reawakening and his growing awareness of the plight of Chinese Christians.

Early on in the novel, before departing for China, Ben fires his cousin Doug because too many employees in the company have reported him for violating their First Amendment rights to freedom of religion (Doug is a Christian and doesn't hide it). Reading that scene was like reading a rhetoric exchange between two people who are play-acting what it would be like to fire someone for letting their Christian flag fly in the office.

The scene also is heavy-handed in its attempt to draw parallels between American Christians being silenced in the workplace and the silence and persecution the Chinese government inflicts on Christians there. I do think it is important to note, though, for anyone scratching their head and wondering how long the idea of American Christians being persecuted in the workplace has been around - it had been circulating for awhile when this came out in 2001. At this point, it's been around for decades.

Persecution in the Church in China persists to this day, and I'm not about to ignore or minimize it. There are biographies and autobiographies of Chinese Christians who have gotten out (and missionaries to China) you can read in order to understand what they experience. It's heartbreaking, and I love that Safely Home puts it in front of readers who would never pick up a biography. For those who rank the artistry of a Christian fiction novel on how much Christianity is being packed into the story, this one is likely to be a winner (the Evangelical Christian Publishers Association gave it the Gold Medallion Book Award for Excellence in Evangelical Christian literature). For me, this is a 'slap-em-till-they-see-Jesus' fest, which is guaranteed to make me drop a novel every single time.

Conclusion:
I firmly believe there are ways to tell a story like Safely Home wants to be with the artistry of a fiction writer outside the Christian fiction and without compromising the central faith of its characters or the impact of what is happening in the place the author set it. Christian fiction can be such a tricky genre for readers and writers alike, but the potential impact is immeasurable. I want to see it be better, and one of the best ways I can think of (besides holding the authors' feet to the fire with reviews talking about where they went wrong) is to invest in the genre. By that, I mean reading it AND writing it.