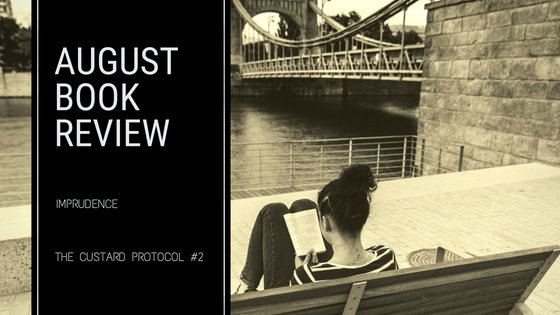 August's book review for general consumption, is here, and I am happy to say that it is Imprudence, by Gail Carriger. Since it is the second novel in The Custard Protocol series, a SPOILER WARNING is now in effect for the entirety of the Parasol Protectorate Universe. If you haven't read the rest of it, you might want to stay clear of this review until you've caught up with all of the novel series.

If you are still working your way through the Finishing School series, though, maybe my reviews of Waistcoats & Weaponry  (book three) and Manners & Mutiny (book four) from last year will help?

Wow, that was a mouthful. On to the review, then. 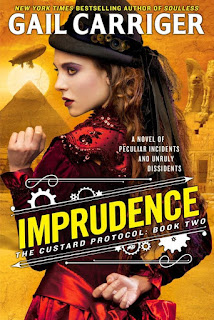 Summary:
Prudence (Rue) and the crew of the Spotted Custard are riding high after their adventures in India, but their return to London quickly brings them back down.

Opinion:
My feelings about this one are mixed. Imprudence paid off some major strings left untied from the end of The Parasol Protectorate series in regards to Biffy, and Alexia and Conall (Rue's biological parents), and I was giddy with excitement to see that. I'm as much a fan as ever of the words that Gail Carriger puts into a story. Those things more than anything else are what kept me reading to the end of this one.

However, Rue as a point of view character is starting to wear on me. The options for her development as a character seemed much more limited than in Prudence, seeing as so much of the story this time around revolved first around getting Rue's parents to their destination in one piece, then around the consequences of the ongoing intellectual feud between Percy and Quesnel. It was more about other people and other things than her, so there wasn't enough room for her to grow as much as I would have liked to see happen.

From what I understand, Competence (#3 in the series) is from Primrose's point of view. Hopefully, that alleviates some of the weariness.

There were two important developments for Rue in this book. The first seemed to be the movement of her romance with Quesnel from flirting and sexual tension into a physical relationship that may or may not be love (the intent may be to keep them together, but I'm not convinced of their staying power going into the next book). The second was Alexia officially initiating Rue - along with Prim - into the Parasol Protectorate. While Alexia doing this was the reigns was a lovely moment (and an important development for the series), something about it just felt weird and not quite right. It needed to happen, but I can't quite put my finger on what felt off about it.

Also, I suppose the Queen's withdrawal of  protection for Rue from the supernatural world, her parents' departures from their respective posts (Lord Maccon from BUR and Alexia from the council for supernaturals), and Rue coming of age was all intended to impress a sense of danger on the group in their travels, but other concerns in the story overwhelmed it. I'm hoping those concerns get paid off in later parts of the series.

Conclusion:
No writer is perfect. Not even your favorite.