Dear Netflix, Do You Really Know What I Want to Watch? (Part 1 of 2)

November 08, 2018
Awhile back, I was looking through my Netflix profile to see what science fiction & fantasy television and movie suggestions it had for me. I found out some interesting things about their suggestions. For example, did you know they throw out a whopping 75 suggestions? I do now, because I took the time to count. Also - did you notice that for everything that comes up as at least a 50% percent match in their algorithms, they note the percentage match?

While I was looking through the suggestions, I had this brilliant idea that it would be fun to write a blog post or two about the top 25 suggestions and how close they actually are to my taste in the scifi and fantasy genres. 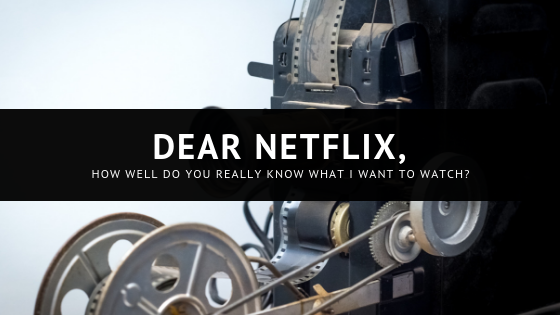 About my methodology: I hadn't gone through and marked everything I've ever watched as of the time this list was generated. I genuinely wanted to see what they recommended based on the things I've watched in the time since the profile was set up, and if/where some of my all-time favorites landed on their suggestion list. Even though there were 75 suggestions in total, I chose the 25 for my sanity (and yours).

Suggestions 13-25, along with the percentages. All movie summaries are per their descriptions on Netflix, except for the ones that are no longer available to stream on the service. In those cases, descriptions are courtesy of IMBb.com.

In a future with a strict one-child policy, six septuplets must avoid government detection while searching for their missing sister.

Have I Seen It? No
Would I Watch It? At some point, yes. The one-sentence description makes it sound quite interesting.

A coder at a tech company wins a week-long retreat at the compound of his company's CEO, where he's tasked with testing a new artificial intelligence.

Have I Seen It? No.
Would I Watch It? Not unless someone whose movie recommendations I trust told me I should see it. AI isn't an aspect of scifi that interests me much.

A former thief leads an eccentric band, including a blind monk and an enemy robot, on a mission to steal plans for a powerful imperial space station.

Have I Seen It? Shockingly? No.
Would I Watch It? I'm not sure. I loved the original Star Wars trilogy (before the digitally remastered versions that added in a few things from the first three episodes), but I haven't been as excited about anything that's come since.

Based on the best-selling novel, this supernatural drama focuses on the romance between Ethan and Lena, the enigmatic new girl in his Southern town.

Have I Seen It? No
Would I Watch It? Based on the description above, no.  It sounds more oriented to the relationship than the mystery of the girl, and that's not something that interests me.

Vampire Hunter Van Helsing travels to a mysterious region of Europe on a quest to vanquish Count Dracula, the Wolf Man and Frankenstein's monster.

Have I Seen It? No
Would I Watch It? Most likely, yes. In the last few years, I've been reading more stories based around vampires, werewolves, and other paranormal creatures, It may have crept into my movie-watching habits as well.

A group of wayfarers stranded on the infamous Isla Sorna fight for survival as a host of new -- and deadlier -- dinosaurs try to make snacks of them.

Have I Seen It? No
Would I Watch It? Maybe? I've seen the original, and read the book it was based on. I haven't seen The Lost World, though, so I'd have to commit to watching that first.

Four boys tap into the supernatural powers they inherited from their fathers, who escaped the Salem Witch Trials by forming a covenant of secrecy.

Have I Seen It? No.
Would I Watch It? Based on the description, no. While I am more interested in supernatural and paranormal stories than I used to, I tend to pass on the witchcraft stories.

Lara Croft, skilled in hand-to-hand combat, must recover antiquities lost in a secret society. She meets her match in the evil Powell.

Have I Seen It? No.
Would I Watch It? Someday. Despite the high percentage Netflix has given it, and the fact that I've actually seem the infamous tree with my own two eyes, I'm not as interested in it as what I've been watching lately would suggest.

Picking up where his cult show "Firefly" left off, Joss Whedon's tale of galactic unrest follows Capt. Mal Reynolds and his scrappy but loyal crew

Have I Seen It? Yes. More times than I can count.
Would I Watch It Again? Considering how many times I rewatch it and Firefly? I think we all know the answer to this one.

Have I Seen It? Yes.
Would I Watch It Again? Yes. As long as I can find it somewhere to watch. It's been a few years.

Have I Seen It? No.
Would I Watch It? Not sure, honestly. Maybe dinosaurs running amok was something I could only watch one time before it got stale for me.

In an LA rife with interspecies tensions, a human cop and his orc partner stumble on a powerful object and become embroiled in a prophesied turf war.

Have I Seen It? No.
Would I Watch It? I might. I grew up in a household that was big on scifi, fantasy, and cop procedurals. It sounds like it's right up my alley.

From the idyllic shire of the Hobbits to the smoking chasms of Mordor, Frodo Baggins embarks on his epic quest to destroy the ring of Sauron.

Have I Seen It? Yes, and as recently as in the last two-three weeks.
Would I Watch It Again? Yes.

I wasn't overly surprised at the top 25 when I first wrote down this list, because these movies seem to fit into my interests based on the algorithms Netflix uses. What has been interesting to me as I've been gone back through to find movie summaries is how the suggestions list has probably changed since I wrote it down. The percentages have shifted, with some showing a higher percentage match while others are lower - some to the point where Netflix isn't showing it next to the title anymore. I wonder what the top 12 are going to look like.
Interested in seeing the top 12? Come back next week to see what Netflix really, really thinks I want to watch.