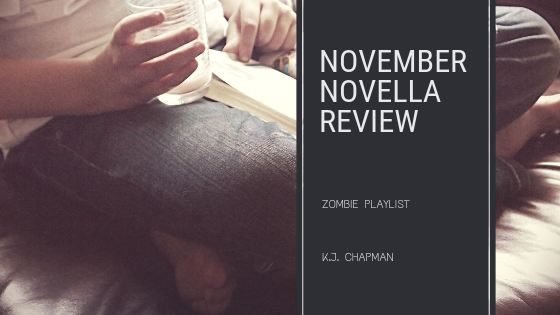 Happy Thursday, everyone. This month, I'm stepping into zombie fiction with K.J. Chapman's novella Zombie Playlist. Happily for you, it is not tied to a series of stories. If you're into post-apocalypse stories, zombie stories, or stories with kick-ass female leads, this review should be right up your alley. 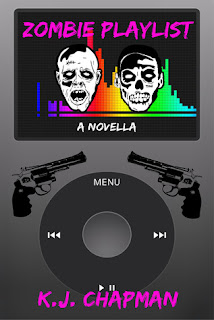 Summary:
The zombie apocalypse is here, and all Dagger wants is to stay alive and (maybe) get home. Armed with an iPod, a metal bat, and some blades, she is on a mission to reach her family home down the coast, and nothing is going to stop her. Not King, the hapless straggler she picked whose conscience still operates like the apocalypse didn’t happen, and certainly not zombies.

If she has to teach King how to stay alive, then at least she has some good music to keep her company, right?

Opinion:
This one is hard to find a complaint about, y’all. Anything I say of a critical nature is going to be nitpicking, but is that really a bad place to be when writing a review? I don’t think so, but maybe it’s just me. Zombie fiction is not something I pick up often because I get a little bit squeamish sometimes about blood and gore and, well, brains.

All of that said, Dagger is one of my favorite female characters to come off of the page in a long time. She’s strong, fierce, and committed to getting home (an isolated family home that isn’t likely to have been hit by the zombies). Her backstory isn’t completely clear, but that isn’t as big of a problem for me as it would normally be. Dagger’s a no-nonsense kind of girl and does not see the point in dwelling on what happened in the past. She’s primarily concerned with the logistics of surviving and getting to the place she wants to be. There’s no time to waste worrying about who she was before the zombie apocalypse occurred.

King, on the other hand… oh, King. In the beginning, he’s not the most likeable of characters. He kind of grows with you (and Dagger). Like a fungus. I’m still not sure how I feel about him or if I believe in the long-term potential of the relationship that develops between him and Dagger over the course of the story. The one thing it has going for it is the zombie apocalypse.

Ah, well. At least they get a happy for now ending?

Conclusion:
Wonderful things happen when you let a story be the length it is meant to - whether it's a six-part series of novels, a novella, or a flash fiction piece.


If you love zombie fiction and have any recommendations for reads that are lighter on the brains and gore action – let me know in the comments. If not, leave me a comment with something awesome you’ve read recently. As long as my TBR list is, I’m always adding to it, so… might as well get your picks on there, right?