How do you come up with character names?

It's a question I've seen come up quite a bit lately in some of the groups I'm in on Facebook. Answers varied, but most writers seem to have specific places they go (online or off) to help them find names.

Those answers inspired me to share the sites that have helped me the most here on the blog today.

Behind the Name - Random Name Generator 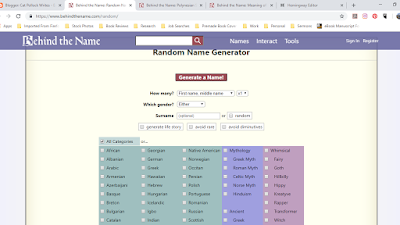 Behind the Name is better known as a site that allows people to look up the origin and meaning of names - first and last. A fun tool on their site for writers is the Random Name Generator. It's one I use often when I am creating characters for my writing projects.

This generator gives me options when I need to generate character names. In real life, parents are influenced by many things when they select a name for their child. Sometimes it's their national/ethnic background. Sometimes it is an interest in a specific field of study or a story. If I am looking for a character name based on some of these influences, I can generate one.

It also allows me to cut out rare names and names that are diminutives of other names (ie. Katie as a shortened version of Katherine, or Nick of Nicholas). I'm not usually looking for rare names or nicknames, so this is helpful.

An added bonus is I can generate a life story for characters that need backstories along with the name. This life story comes with biographical and physical details about things like:


Not that I've ever needed to know a character's blood type, but it is useful information just in case.

Why I Don't Use It for All of My Characters


There are many options for nationalities and ethnic backgrounds, which is great. However, you will have an easier time narrowing down your search if your character is of European descent. The search only includes names they have added to their database. This does not include all the names submitted to the websites, and is a major flaw for writers with non-white characters they are trying to name.

What makes this tool less helpful for me is that some of my characters come from some of the backgrounds that are missing. 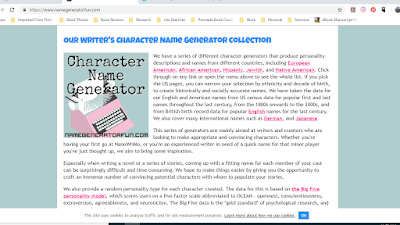 The Name Generating Fun website has been around since 1999 (before I started taking writing seriously as a career choice). Some of their generators are goofy. Others are great for world-building and helping avoid copyright or trademark infringements. The generators I use the most often are their Character Name Generators for Writers.

The Character Name Generators for Writers come with useful generating options and additional information. Like with the Behind the Name Random Name Generator, I have the option of generating names for characters from specific people groups or nationalities. I can also choose between a list of names or a name and description.

For these generators, the name and description option provides a detailed personality profile. This profile is based on the Big Five personality model, and includes likely jobs the character would hold. Some of the generators also have the option of generating names used in certain decades.

There are two things I use these generators for:


A cool feature that I'm still exploring with this set of generators is how they explain the naming conventions for the people group I'm generating a character from at the end of each search.

Why I Don't Use It for All of My Characters

The people group/nationality search options are incredibly limited - mostly Western European, North American, and some Asian countries. If the character I'm trying to name is not of those backgrounds, I do not use this site for them at this time.

One thing worth mentioning here, though, is that Name Generator Fun is perpetually adding name generators to their site. I anticipate additions in the future to alleviate some of the gap. 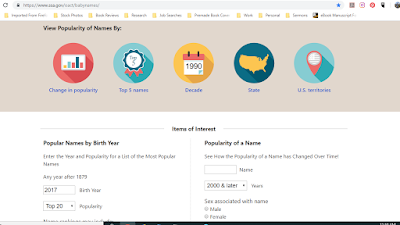 The U.S. Social Security Administration website includes a page where the most popular names given to babies any given year can be searched as far back as 1879. While I did not see the other two pop up in people's answers, many writers stated that they use this source often for naming characters. Guess that makes me one of the cool kids?

This site is a goldmine for naming American characters in stories set between the late 19th century and now. I can look up popular names by years, or by state or territory. I can ask it to tell me the Top 20, 50, 100, 500 or 1000 names for those years, and I can track the popularity of a name from the late 19th century until today. The search results can even tell you how popular they were by percentage or actual number of births.

This is one I use when I'm stuck for a character's first name, or when I'm looking for names for the children of my older characters.

Why I Don't Use It For All My Characters

This tool is useful for coming up with names of characters with an American background, but not helpful for characters from other countries. Since the audience it aims for is primarily parents-to-be trying to decide on baby names, it is not as helpful for full character names.

Before I hear any complaints about how I did not include any resources specifically for looking at the meaning of names, I have a good reason. The truth is that I rarely give my characters names with specific meanings. On the rare occasion I do feel the need for that, I usually run with the top result from my internet search for first name meanings the day I need to.

Writers in the room - where do you go for names for your characters? What sites are in your character name generating toolbox? Let me know in the comments!

P.S. Check out another Writer's Toolbox post if you're interested in other tools I use to help me with the writing process - Thesauruses I Love