Science Fiction through the Centuries - The 1600s

February 22, 2019
Sorry this is a day late - I had some things come up this week that knocked me off my blogging schedule. Unless something comes up again, I'll be back to my normal posting schedule next week. 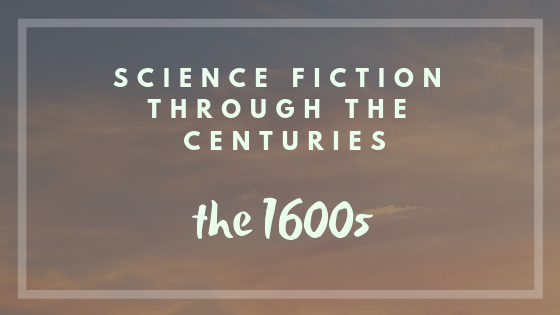 When I said in my 2019 overview that I'd be working on a blog series or two about the science fiction genre, this was not one of the series I meant. At the time I wrote it, I'd been trying to work out the logistics for a completely different series I was (and still am) committed to getting done.

Then, about a week before the first in the series was set to go up, I saw an article on how a massive number of works copyrighted in 1923 were entering the public domain in the United States in 2019 (and what a huge deal it was because the last time anything did so was in the late 1990s). I thought, why not do a blog series on science fiction works from the early days that is likely to be in the public domain?

Like any logical human being, I pushed the series I'd been working on back, and here we are - in a series looking at earlier works of science fiction that may or may not be in the public domain.

Today, we're looking at works of science fiction produced in the 17th century.

Written in Latin by the famous astronomer and mathematician, Somnium is one of the earliest noted works of science fiction. It is the recounting of a dream Kepler has about reading a story. In this story within the dream, Duracotus, a young Icelandic student and adventurer, learns from his mother about space-dwelling "daemons" that live on the moon. They have the ability to travel between Earth and the moon via a shadow bridge created by a solar eclipse.

History is a cruel mistress (I know, I spent years of my life studying it), and Somnium was relegated to the backlogs in its original Latin until German interest in Kepler was reignited in the mid-19th century.

Unfortunately for English speakers, the oldest known English translation of this work only dates back to the 1960s. For anyone reading this in the United States, that translation does not enter into public domain until at least the mid-21st century. Until I've had a chance to do more research, I can't say with any certainty where copyright protection ends in other countries.

Written by the English philosopher and statesman Sir Francis Bacon, New Atlantis is the utopian story of a European crew that gets lost at sea west of Peru and washes up on the island of Bensalem. It was an unfinished story, intended for inclusion in another project, and published by his friend/chaplain/literary executor, Dr. William Rawley.

Since this work was written in English, texts of New Atlantis that are readable to English speakers  have long since entered the public domain. I found electronic copies of the story through the Project Gutenberg website.

The Man in the Moone, or a discourse of a voyage thither is, perhaps, the first science fiction work to have been written in the English language. It was written by Francis Godwin, Bishop of Hereford and published in 1638. In Godwin's story, the protagonist - Domingo Gonsales - travels to the moon by means of a flying machine powered by gansas (wild swans).

The original English translation has been in the public domain for a long time. I found electronic copies of this story on the University of Adelaide's website, as well as on Project Gutenberg.

The Man in the Moone via Project Gutenberg:
https://www.gutenberg.org/ebooks/46591

The Man in the Moone via University of Adelaide's website:
https://ebooks.adelaide.edu.au/g/godwin/francis/man-in-the-moone/

Online retailers links for The Man in the Moone (for print copies): Google Search

Written by French novelist Cyrano de Bergerac, this is the first in a series of satirical novels in which the narrator (also named Cyrano, conveniently enough) tries multiple times to travel into space - first by strapping bottles of dew to himself, then building a flying machine. It's not until rockets are strapped to the flying machine that he is successful. In Cyrano's interstellar travels, he runs into fellow space traveller Domingo Gonsales (yes, the main character from The Man in the Moone).

The original was written in French, but translations into English occurred before the start of the 20th century, which safely puts it into public domain for a number of countries - including the United States.

The Other World via the Project Gutenberg:
https://www.gutenberg.org/ebooks/46547

The Other World via the University of Adelaide:
https://ebooks.adelaide.edu.au/c/cyrano_de_bergerac/voyage-to-the-moon/index.html

Online retailer links for The Other World (for print copies): Google Search

Part romance, part adventure story, part utopian satire, this example of proto-science fiction was written by Lady Margaret Cavendish in 1666. In it, a young woman enters a utopian kingdom in another world through the North Pole, rises to power there, then organizes an invasion of her homeland.

As it was written in English, The Blazing World entered into public domain ages ago.

The Blazing World via the Project Gutenberg:
https://www.gutenberg.org/ebooks/51783

I know, I know, I may not have gone far enough back for some, and might have gone too far back for others. I imagine I'll make my way further back in the time machine to works written previously to the 17th century, but this felt like an easy spot to land at and get started.

Have you read any of these works? Does going back to the early works of science fiction hold any interest for you? Is there anything interesting that strikes you about these early stories/authors? Let me know in the comments!