As an author (and reader), sometimes I feel like there's this unspoken rule when it comes to watching and talking about television and movies. The written word is always better, especially when the television show or movie in question is based on a book series.

Would it surprise you to find out, though, that I actually enjoy seeing stories adapted from a book/short story for television and movies? And would it shock to you find out that there are times when I think the adaptation is better than the original?

One of the biggest reasons why I personally struggle with this unspoken rule is because when it comes to science fiction, my love of the genre started with watching television. Don't get me wrong, because there is nothing that can beat the way I feel when I get to curl up on the couch with a book and a cup of tea to read the day away, but... 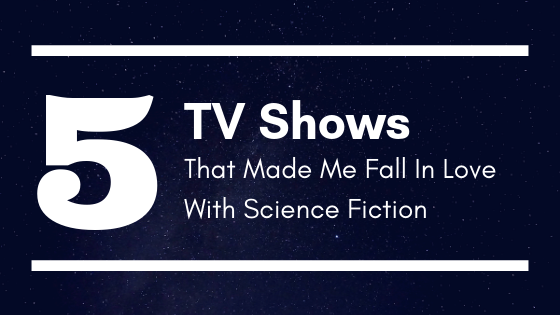 After Star Trek: The Next Generation, this is one of the first science fiction shows I remember watching as a kid. I much prefer the mountains to the water in real life, but there was something so fascinating to me about a sci-fi show set in the near-future on a ship under the ocean. Especially the part where one of the greatest scientific minds on the ship was a child prodigy.

I had to mention this one first because one of the first longer stories I wrote was one with a ridiculously similar premise to this TV series. Yeah, it was that influential for me.

2. Star Trek: The Next Generation

I've fallen off of the Star Trek bandwagon in the last ten years or so, but TNG holds a special place in my heart because it's a show that brings back all the feels for me. This is the first sci-fi show I clearly remember watching with my parents, although it was hit or miss as to when I actually got to watch it because of when it aired versus my bed time (first-run syndication and all that fun stuff). Still, it was so much fun to watch their adventures when I got the chance.

To be fair, I also watched a lot of Reading Rainbow, and the fact that LeVar Burton was involved with both might have gotten me excited about it in the first place.

I know, I know, everyone either loves Star Trek or Star Wars, but this series was huge for me. It was one of those shows that, once they started releasing it on DVD, my family could gather around the television and watch for hours on end. I could geek out about the technology AND the mythology created around the series from our own history.

Plus Captain/Major/Lieutenant Colonel/Colonel Samantha Carter was portrayed as a strong, smart, capable woman without playing into a lot of the tropes about bad ass female characters in the genre... yeah. That, too.

If Seaquest DSV was where I first really became interested in sci-fi, then this show is the one that got me interested in parallel universe stories. The tale of a group of people who got stuck on an endless journey to places where historical events played out differently, but they never knew where they were going or how long they had to stay until they arrived was fascinating. After Firefly, I would say that giving up on this series was one of FOX's biggest atrocities again the sci-fi shows it tried to pick up and run with.

I blame this series for putting me on the path towards the book series I'm currently on. Or thank. I'm not sure which some days.

Speaking of - there's no way a show I rewatch at least once or twice a year (with some episodes that go on in the background while I'm writing) would not make the list. I remember the struggle to figure out when it was actually on during its original run too well. And being stunned when the series was cancelled. This space western with a team of smugglers was everything the trailers said it would be and a million times more.

Over the years, there are things I've come to realize are problematic about the series - which I'm planning to post about at some point. It does cut into my enjoyment as I go back through it. but I cannot pretend like I never loved the show in the first place. That would be dumb.

How do you feel about television shows versus books? Are there any TV shows that are exceptionally good at telling stories? Do you think that television has influenced what you read/write in any way? Let me know in the comment section!