On Matters of Love and Conviction (Tuesday Blog) 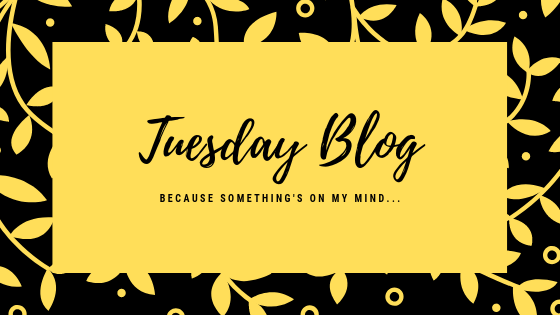 Hello, and welcome to another Tuesday Blog.  What does that make, two this month? Wow. Cool. I feel a little more on top of things right now.

Anyway - I was going through my drafts folder yesterday, and found an old post I wrote a couple of years ago that (minus editing) was ready to go up at any time. I refrained back then because I was a mess and some of the things that I talk about in this post were fresh wounds at the time. I wanted to give myself some space to heal and see how I felt about this post once I was further along in the process. Funny how it took so long, eh?

Hope you enjoy this little glimpse into the mind of Cat in 2017. If matters of faith aren't your thing, no worries. Thursday's post is all about science fiction. :-)

I think almost every single person on the planet with a social media account is guilty of passing on the ones that resonate with us at one time or another. With an endless supply of information streaming into every conceivable part of our lives, the chances are good that something like that will sorely tempt us (at the very least).

And when I say almost, I mean almost. Not all. Some people have more willpower than others.

Like me. Sometimes I have no will power at all when it comes to those things. 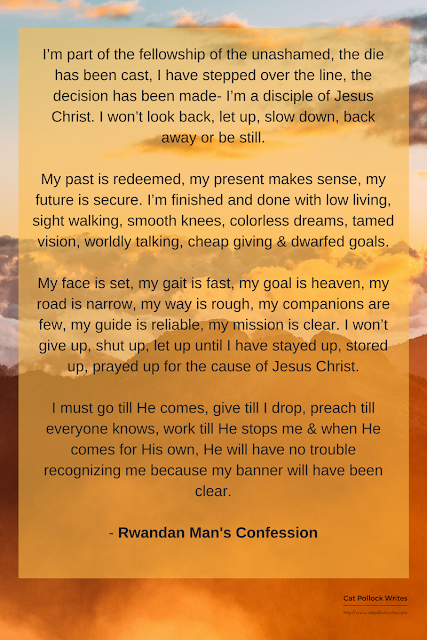 Some of my friends from the on-campus Christian fellowship I attended in college who lived in the dorms thought it would be a great idea to write it out on poster board, then put it up on our front doors. To make it clear who we were and what we stood for.

My roommates and I jumped on the bandwagon. For a day or two.

The second or third day it was up, one of my roommates asked about taking it off the door. Something about it didn't feel right, she said. Like it could provoke an ugly confrontation. And it didn't communicate love very well at all.

So we took it down.

I hadn't thought much about it since, but something I've read recently brought the memory of it back. It was a mini-manifesto with all the right punch to convince me to write it down and add it to my quote board - right up until the last line.

Instead of wanting more, we will strive for less.
Instead of easier, faster, better, we will opt for slow and deliberate. We will take our time.
We will seek first the needs of others and trust that our own will be provided.
We will discipline ourselves to believe.
We will find our lives by losing it.
We will seek the pearl of great price and sacrifice everything for it.
We will become less to gain more.

- Jeff Goins, from Wrecked: When A Broken World Slams Into Your Uncomfortable Life

Sit in that for a moment or two. Take it in.

I understand what the author is trying to get at, because I've been through the process of learning what dependency on God can and should look like. There is nothing inherently wrong with what is being said in this mini-manifesto (author called it that, not me), but the last bit on its own jumps out at me because of how easily it can be read to mean something else.

We will become less to gain more.

When I read that the first time, the second time, and then again for a third time, I struggled with it. I've known people in the past who would focus in on the part about gaining more. They'd only serve people because of what they thought they were going to get out of it in the end. Those people? They'd read a statement like that and use it as a justification for their mentality.

I haven't just known people like that. I've been burned by them, and I know I'm not the only one.

Does that mark me as being overly sensitive to be focusing in on that? Probably, but I suspect I'm not the only one out there that would read it this way.

Really, I do know the way I'm reading the statement isn't the way the person who wrote it meant it to be taken. Unfortunately for it (and the Rwandan Man's Confession for my roommate), it just does not feel like a right statement to me. I never want to communicate anything less than God's perfect love, and I never want to communicate that with the wrong motivation in my heart and mind. Well-intended as these things are, they can communicate the opposite of that.

What about you? What is something that's made the rounds that has been meant one way and you've had a different perspective that made it not as amazing to you as the person sending it to you thinks it is?