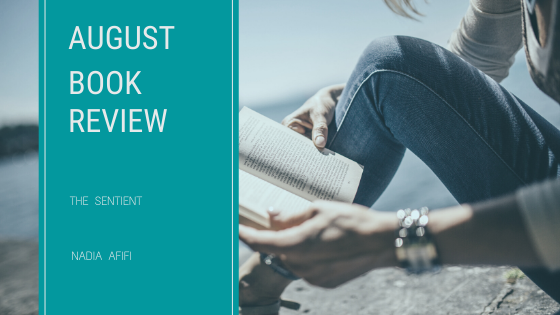 We're going (almost) straight into the review today, folks. No pretty intro.
Before we really get into this review, though, I apologize in advance for spelling/grammar/other errors. I've had a number of unexpected things come up in the last couple of weeks. I pushed this review back a couple of days to help accommodate them but one can only do that to a certain extent before it becomes overdue.

Disclaimer Tag:
The book for this month's review was provided to me for free by the publisher via NetGalley in exchange for a fair and honest review of the story.

Amira Valdez is a brilliant neuroscientist trying to put her past on a religious compound behind her. But when she’s assigned to a controversial cloning project, her dreams of working in space are placed in jeopardy. Using her talents as a reader of memories, Amira uncovers a conspiracy to stop the creation of the first human clone – at all costs. As she unravels the mystery, Amira navigates a dangerous world populated by anti-cloning militants, scientists with hidden agendas, and a mysterious New Age movement. In the process, Amira uncovers an even darker secret, one that forces her to confront her own past.

When I read the description for The Sentient, I was immediately intrigued by the story idea - a cult survivor working in some capacity on a cloning project who uncovers a conspiracy to stop said project. That sense did not lead me astray.

One of the things I loved was the basic premise and how the story lived up to it. The premise is not something I've come across in the past. I mentioned up above that the premise was intriguing, and I felt like The Sentient delivered on that score.

Another thing was the protagonist. Amira's not a character I immediately related to, but she is one I empathized with immensely in the beginning and came to relate to later on. Afifi does an excellent job throughout the novel of allowing Amira to concurrently be the brilliant neuroscientist everyone is counting on to save the day and the religious cult survivor still figuring out life in the outside world. Neither piece of her identity overshadows the other.

Also - I feel like I need to mention representation. Amira is Hispanic, and (from the info I was able to gather as I read) not a white-passing one either. It was fantastic to pick up and read a science fiction novel where a not-male, not-white female character is the protagonist in the story.

While not a hard knock, one thing that tends to put a frown on my face is when a story is heavily front-loaded with information as I find myself unable to digest everything I will need to understand in the back half. The Sentient is more heavily front-loaded than I usually like, but the way Afifi has written it makes it more easily digestible.

My biggest issue is with the way the first and second halves of The Sentient flow together. The pacing in the first half, while not slow, did not leave me prepared for the heavily action-packed second half. I may well have missed some of the signs pointing towards this shift, but the transition felt strange. On first read, I very much felt like the events that kicked off in the middle of the story were more appropriate for a climax with how the story had been built up to that point. Going back, I see better where things tied in, but it may still be a problem.

If front-loading bothers you more than it bothers me, this may not be the story for you.

The Sentient is a story I really liked. The angle it took with cloning was unexpected and interesting. I loved Amira as a character. It's also the first in a series and I'll be keeping an eye out for news about its sequel and when that releases.
If this story sounds like something you'd like to read, it's available for pre-order now at major retailers as of the time this review went live (release date is September 8th, 2020).
P.S. Life is going to be a wee bit crazy going into next week, so I'll be taking next Tuesday off and coming back with a fresh post the Tuesday after Labor Day. If you are an American reading this, I wish you a safe and relaxing holiday weekend.