Dear Goodreads, Do You Really Know What Science Fiction I Want to Read? 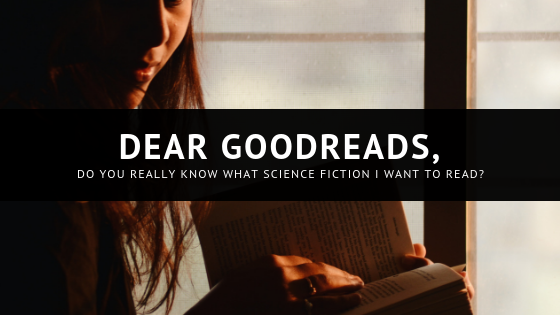 Remember how I did a two-part series a couple of months ago that checked to see if Netflix would recommend sci-fi and fantasy movies I was interested in? Well, before I launch into the blog series I was talking about a couple of weeks ago, I thought it would be fun to take a look at Goodread's science fiction recommendations in a similar manner.

With 50 recommendations on the list, and in the interest of not turning this post into a novel, I decided to narrow the list down. There were numerous recommendations based on a few authors I've read, so I chose one recommendation per author.

Also, all of the summaries are taken from the book's Goodreads description unless otherwise stated.

Summary:
After the Iron Duke freed England from Horde control, he instantly became a national hero. Now Rhys Trahaearn has built a merchant empire on the power - and fear - of his name. And when a dead body is dropped from an airship onto his doorstep, bringing Detective Inspector Mina Wentworth into his dangerous world, he intends to make her his next possession.But when Mina uncovers the victim's identity, she stumbles upon a conspiracy that threatens the lives of everyone in England. To save them, Mina and Rhys must race across zombie-infested wastelands and treacherous oceans-and Mina discovers the danger is not only to her countrymen, as she finds herself tempted to give up everything to the Iron Duke.

Am I adding it to my TBR list:
Yes. I'm a fan of Gail Carriger's writing, and steampunk is becoming one of my favorite science fiction subgenres to read.

Summary:
A world shared by three native humanoid races - the cavern-dwelling Gdemiar, elvish Fiia, and warrior clan, Liuar - is suddenly invaded and conquered by a fleet of ships from the stars. Earth scientist Rocannon is on that world, and he sees his friends murdered and his spaceship destroyed. Marooned among alien peoples, he leads the battle to free this new world - and finds that legends grow around him even as he fights.

Am I adding it to my TBR list?
Yes. This is Le Guin's first novel, and I'm not sure why I haven't added it yet when she's considered to be such a powerhouse in science fiction. *sigh* I feel so silly for that.

Summary:
In the zombie-infested, post-apocalyptic America where Benny Imura lives, every teenager must find a job by the time they turn fifteen or get their rations cut in half. Benny doesn't want to apprentice as a zombie hunter with his boring older brother Tom, but he has no choice. He expects a tedious job whacking zoms for cash, but what he gets is a vocation that will teach him what it means to be human.

Am I adding it to my TBR list?
This is still a question mark. While most of the reviewers on Goodreads enjoyed it, I'm picky about zombie stories and (as stated above) I'm burning out on the young adult genre.

Summary:
World War III is raging - or so the millions of people crammed in their underground tanks believe. For fifteen years, subterranean humanity has been fed on daily broadcasts of a never-ending nuclear destruction, sustained by a belief in the all powerful Protector. But up on Earth's surface, a different kind of reality reigns. East and West are at peace. Across the planet, an elite corps of expert hoaxers preserve the lie.

Am I adding it to my TBR list?
Yes, but low on the list because I think I'm burning out on dystopian stories as well. The reviews on this one were middle of the road and suggested I start somewhere else with Philip K. Dick's writing.

Summary:
Prince Aleksander, would-be heir to the Austro-Hungarian throne, is on the run. His own people have turned on him. His title is worthless. All he has is a battletorn war machine and a loyal crew of men.Deryn Sharp is a commoner, disguised as a boy in the British Air Service. She's a brilliant airman. But her secret is in constant danger of being discovered.With World War I brewing, Alek and Deryn's paths cross in the most unexpected way…taking them on a fantastical, around-the-world adventure that will change both their lives forever.

Am I adding it to my TBR list?
Yes. While this is young adult fiction, it also sounds like it has a couple of elements I enjoy in abundance. Namely, steampunk and alternative history (one of the first science fiction novels I remember reading is Harry Turtledove's Guns of the South).

(3.75 star rating on Goodreads as of Jan. 2019)
Recommended because I've read The Immortal Crown (Richelle Mead)

Summary:
A dark and tender post-apocalyptic love story set in the aftermath of a bloody war.In a city where humans and Darklings are now separated by a high wall and tensions between the two races still simmer after a terrible war, sixteen-year-old Ash Fisher, a half-blood Darkling, and Natalie Buchanan, a human and the daughter of the Emissary, meet and do the unthinkable—they fall in love. Bonded by a mysterious connection that causes Ash’s long-dormant heart to beat, Ash and Natalie first deny and then struggle to fight their forbidden feelings for each other, knowing if they’re caught, they’ll be executed—but their feelings are too strong.When Ash and Natalie then find themselves at the center of a deadly conspiracy that threatens to pull the humans and Darklings back into war, they must make hard choices that could result in both their deaths.

Am I adding it to my TBR list?
Hmm. That's tough to say, because I would love to find a series (or ten) to drown the sorrow of knowing that the rest of Richelle Mead's Age of X series (which The Immortal Crown is part of) will probably never see the light of day. However. the summary reads a bit too much like Shakespeare's Romeo and Juliet plunked into a post-apocalyptic setting. Since Romeo and Juliet is arguably my least favorite Shakespeare play... well, that makes me less inclined to add it. I'll have to sleep on that decision for awhile.

Summary:
When Dean raced out the door to catch the school bus, he didn’t realize it would be the last time he’d ever see his mom. After a freak hailstorm sends the bus crashing into a superstore, Dean and a group of students of all ages are left to fend for themselves.

They soon realize the hailstorm and the crash are the least of their worries. After seeing a series of environmental and chemical disasters ravage the outside world, they realize they’re trapped inside the store.

Unable to communicate with the ones they love, the group attempts to cobble together a new existence. As they struggle to survive, Dean and the others must decide which risk is greater: leaving… or staying.

Am I adding it to my TBR list?
Another one I'm not certain about. The premise is intriguing, but the description makes me feel like it could go Lord of the Flies (one of my least favorite stories of all time). Also, again, this qualifies as young adult fiction, and I'm burning out on it.


Despite the number of books on this list that I'm adding to my TBR list, I found Goodread's recommendations to be problematic. For a list that is supposed to about science fiction, there were a ton of books that I did not include in this post. Why? They were clearly fantasy stories and based on fantasy stories I've read in the past. Despite how often science fiction and fantasy get lumped together, they are two distinct genres.

(Although why I'm surprised to find this issue on Goodreads when Amazon owns the site and they can't get their book classifications right is another story altogether.)

Another issue I had with this list was how many recommendations were based off of just a few (popular) authors - specifically Gail Carriger, Suzanne Collins, Veronica Roth, and Ally Condie. I'd like to see more recommendations based on other authors I've read too - well-known or just starting out.

Are you on Goodreads? If so, have you checked out their recommendations for you and what do you think of them?