As you can see, I've decided that the only way is through and to continue with the Science Fiction Through the Centuries series.

I apologize in advance for the shortness of the list this time around. There were more books on this list at the end of last month, but in my attempt to be more thorough I realized some needed to be knocked off. Hopefully the inclusion of one of the first space stories to be written by a woman will earn me some forgiveness. 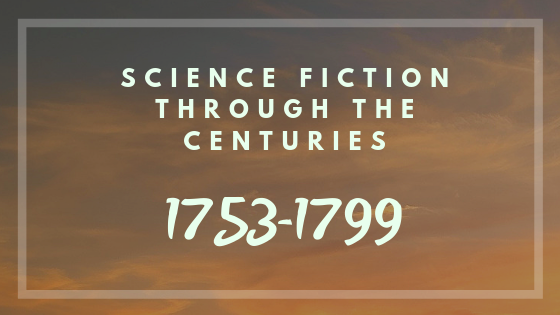 This may not be the first work included in this blog series to have been written by a woman, but it is the first written by a woman that might qualify as space opera. In this outer space adventure, Lord Céton and his sister Monime travel to the seven known planets in our solar system on the wings of a genie. In their travels, they find that the inhabitants of each planet are representative of a specific character trait they've observed in humans on Earth.

Originally written in French by Mercier (then translated to English in 1795 by William Hooper, who also rounded the year in the title up), this is the story of a man who falls asleep and wakes up in the 25th century. After spending a day wandering around and learning about this utopian society, he wakes up and realizes it was only a dream. It may sound cliche now, but Memoirs of the Year 2500 is one of the first to use this particular plot twist back in the day.

Restif de la Brettone wrote this French utopian novel. Per the Amazon.com description, its main character "Victorin devises a set of artificial wings to abduct his beloved Christine, before setting her up on top of a mountain as queen of her own utopia. Then he relocates to the southern ocean where he visits islands inhabited by giants and other variant human species, including beast-men combining the features of humans and animals. His voyage ends in the great City of Sirap, another utopia located in Megapatagonia."

Although Restif de la Brettone is noted as having been praised by Germans who read his work, his native countrymen did not take as much notice until his works were found again in the early 20th century by Surrealists. The first translation of Decouverte Australe, par un Homme-Volant into English was not published until 2017.

Online retailer links for Discovery of the Austral Continent by a Flying Man: Google Book Search

I know this month's list is short, but next month we will be moving into more familiar territory as we dig into works of science fiction published in the early 19th century.

Looking forward to it? Good, because I am too!

Missed previous posts in the series? Catch up here: