Dear Kindle: Do You Know What Science Fiction I Want to Read? (Part 1 of 2) 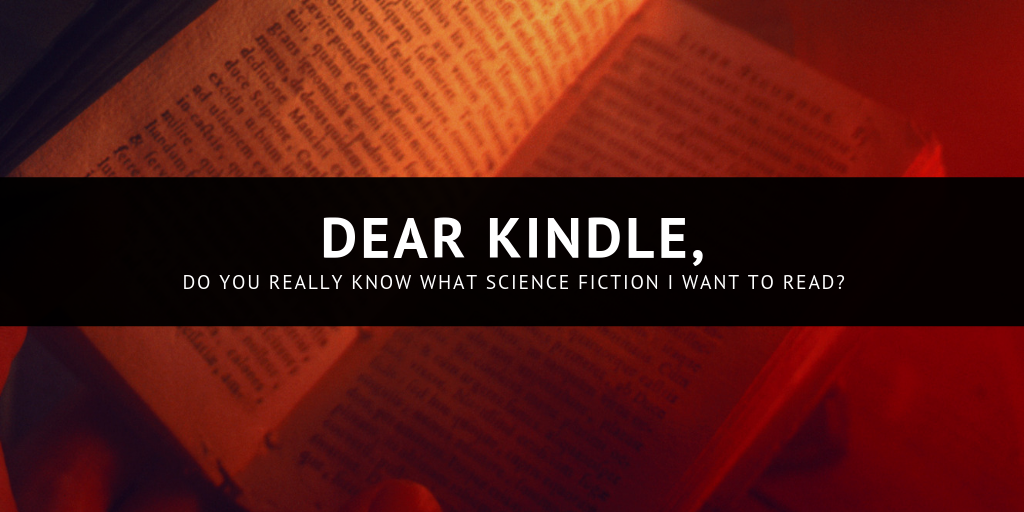 Back in January, I did a quick dive into whether or not the Goodreads recommendations feature would recommend any science fiction I was interested in. So far, it's the most popular post on the blog this year. Which tells me two things:

So - for this round, I'm looking at the recommendations my Kindle gave me in the science fiction realm. The way this works is fairly simple. I'll tell you:
A couple of notes that are pertinent to this examination:
Ready to get into it? Good. So am I.

* - available in ebook format through KU only

Brief Summary:
The second book of the Free-Wrench steampunk series follows the continued adventures of Nita Graus as she makes a home for herself amongst the crew of the Wind Breaker.

Am I adding it to my TBR list?
Not quite yet. Since this is the second book in the series, I'm more likely to add the first book so I can decide if it is worth it to go on to the next.

Brief Summary:
The twelfth book in the Blood on the Stars series about the ongoing space wars between the Confederation and its enemies (first the Union and now the Hegemony) sees a new battle over a super-battleship carrying new and deadly technology.

Am I adding it to my TBR list?
Reading-wise, I've come to realize space and alien invasion stories are not my thing (especially when the description makes it come across as a hard science fiction story). Plus there are eleven books before this one to get through? Solid no.

Brief Summary:
The second in the Far Future SciFi Thriller series takes Lieutenant Jarra Carsean and her young team to the Badlands - an area of space with crazy energy streams, twisted space, and rebels, aliens and pirates they must fight in order to protect the Galactic Empire.

Am I adding it to my TBR list?
No. While the idea of a woman at the helm of a ship is usually one that catches me, this is the second book in the series. I would have to read the first in order to make a decision about this one.

Brief Summary:
The fourth in a post-apocalyptic series about the human race's return to Earth and a secretive genocidal cabal set on depopulating the planet again sees a resistance group rise up to fight against it.

Am I adding it to my TBR list?
Like with Skykeep, I'm more likely to add the first book in the series to my TBR list than this one.

Brief Summary:
The second volume of The 28th Gate series sees Hunter and the crew of the Essta in their continued struggled with the AAA Corporation (who was responsible for creating him in the first place).

Am I adding it to my TBR list?
Again, the answer is no. I'd have to read the first book in the series, and I'm not sure how interested I am in another space opera story.

Brief Summary:
Jason Grimshaw has been charged with getting a group of cadets to Colony 15. It's an easy run until an unidentified alien vessel forces a crash landing and scatters the surviving crew across a planet at war. Even worse? The only pilot to survive is a royal pain in his ass AND she's stranded miles away from the ship.

Am I adding it to my TBR list?
I don't know, maybe? The comedy of the situation might be enough to push me over the edge. Plus, it's the first book in the series.

Brief Summary:
The second entry in a space opera series set on the planet Mars sees escaped captive Celina Dontal aiming for the city of Puskar Stellar in an attempt to duck her captor and to search of her missing sister.

Am I adding it to my TBR list?
I feel like I'm doing almost nothing but repeating myself at this point. This is not the first story in the series, so until I read that, the answer is no.

Brief Summary:
The third part of The 28th Gate series picks up right where volume 2 left off.

Am I adding it to my TBR list?
See my answer to Volume 2 of this series.

Brief Summary:
This is the second in a space adventure series revolving around xenoarchaeologist Telisa Relachik and the group of artifact smugglers she works with.

Am I adding it to my TBR list?
The first book in this series is already on my TBR list so... not until I've read that and decided whether or not I want to continue the series.

Brief Summary:
The fourth part of The 28th Gate series picks up right where volume 3 left off.

Am I adding it to my TBR list?
See my answer to Volume 2 of this series.

I knew when I came up with the idea for this set of posts that, unlike Goodreads, I was looking at a retailer's recommendation feature. What I'd be talking about is something entirely different and more likely to be influenced by the retailer's desire to make money off of its customers.

The profit motivation is why I was not surprised to see that nine out of ten books on this list are later parts of a series. When I looked into earlier parts, I saw the first book in all of the series these books were a part of had been marked down to free or $0.99 (which is often referred to as a loss leader). This loss leader strategy is one indie authors are using more and more frequently to pique reader interest when they are publishing a series. It's risky and works better for some than others, but is also why Amazon would not recommend the first in series here.

Also, when I looked at the list, I thought I would be talking a lot more about how many recommendations were available through the KU program. I will be talking more about it in relation to the box sets, but it was surprising to see the list of recommendations skewing slightly more towards books that are not available in KU. Amazon wants more readers enrolled in KU, so I'd have thought that would be reflected more here.

I think the reason why so many ended up not going on the TBR list is obvious so it's not necessary to go into detail here, except to say that I do not love starting a series in the middle of the action.

As for why there are so many space operas/alien invasion stories on the list? Well, after reading and reviewing The Excalibur Alternative last summer, I downloaded a few other books along the space opera vein onto my Kindle. It did not take me long to realize that I may love space opera on television/in movies, but that doesn't mean I'll enjoy it in written form.

That's all the conclusions I'll draw for now. Stayed tuned for the box set analysis coming at you next Thursday.