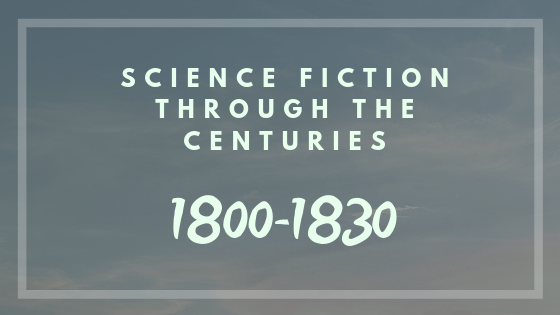 Welcome to the early 19th century. You know, that period of time where:


It's also the period of time where science fiction started to take off as a genre. Let's settle in and look at what was published during that time period, shall we?

Written by French author Jean-Baptiste François Xavier Cousin De Grainville and published posthumously, this novel is considered to be the start of the Dying Earth subgenre of science fiction. It depicts the story of Omegarus (the last man born) and Syderia (the last fertile woman), who have to decide whether or not to try to repopulate a dying planet.

While many of von Voss's works fall into the comedy/satire genres, this story is widely regarded as the first German science fiction novel written (as opposed to Eberhard Christian Kindermann' s Die geshwinde Reise auf dem Luft-schiff nach der obern Welt, welche jungsthin funf Personen agestellet, which is considered to be proto science fiction). Ini. Ein Roman aus dem einundzwangsigsten Jahrhundert is set in the 21st century, and explores a more optimistic vision of its society as well as the technological advances they have achieved.

Unfortunately, there does not seem to be a translation available in English at this time. If you can read in German, however, the copyright for the original text is in the public domain.
Update (08/2021): I was recently informed there is an English translation now on Amazon! I've added the link to the list of places you can find this story.

This science fiction short story by German writer Ernst Theodor Amadeus (E.T.A.) Hoffmann combines ghost and automaton (robot) stories into one as a group of men gather for an evening and debate whether the supernatural or science holds more truth. Originally published in a magazine in 1814, it also appears in a collection of short stories and novels by the author called The Serapion Brethren (published in 1819).

Another short story by Hoffman, this work combines the legends of the Sandman with automaton technology in a chilling tale about an inventor who uses the eyes of children to build the perfect woman and the young man who discovers what he is doing. Originally published in 1816, it is included in an 1817 collection of short stories called Die Nachtstücke (The Night Pieces), and later in Weird Tales Vol. 1.

Armata: a fragment, written by British lawyer/politician Baron Thomas Erskine in his retirement, is the utopian story of a man who sails in a ship on a highway of ocean to the moon.

Mary Shelley's much-beloved Frankenstein is, for those who did not already know what it was, the story of a young scientist named Victor Frankenstein and his creation of a humanoid that does not go as planned. Although the horror elements of this tale are often played out on the big (and small) screen - it was, after all, written because of a competition between Mary Shelley, future husband Percy B. Shelley, and Lord Byron to see who could write the best horror story - Frankenstein can also easily be classified as an early example of science fiction.

Part fictional travel literature, part science fiction tale, Syzmonia tells the story of a voyage undertaken by Captain Adam Seaborn and his crew from the United States to the center of the Earth. Since this is a fictional work, it's pretty clear that Captain Adam Seaborn is the author's pen name, but no one knows exactly who wrote this predecessor to Journey to the Centre of the Earth. It is generally is assumed to have been John Cleves Symmes, Jr. - one of the biggest proponents in the early 19th Century of the Hollow Earth Theory.

This second appearance on the list by Mary Shelley is a post-apocalyptic tale set at the end of the 21st Century in a world that is being ravaged by a plague. Spanning over the course of three decades, it details the rise and fall of a group of friends at what seems like the end of the world. It's not nearly as well known as Frankenstein, due to how harshly it was reviewed at the time of its publication. Reprints only started to circulate in the mid-1960s.

Joseph Atterly - A Voyage to the Moon: With Some Account of the Manners and Customs, Science and Philosophy, of the People of Morosofia, and Other Lunarians (1827)

This space odyssey was written by scholar/author George Tucker (whose work had a known influence on Edgar Allan Poe) under the pseudonym Joseph Atterly. It tells a story of travel to the moon and the various cultures established there, and introduces antigravitic metal into literature as a coating on the spaceship used to venture into outer space.

Jane Webb Loudon - The Mummy! A Tale of the Twenty-Second Century (1827)

Loudon's three-volume novel details the revival of an Egyptian mummy named Cheops in 2126. It is set in a world with futuristic technology, and is noted as an early example of the use of "the mummy's curse" in literature.

Things that had not occurred to me until I started researching this particular post:
Should I have considered it? Probably. Will this come up again with other authors? Most likely. Stayed for next month's post, where I'll be starting this list up again somewhere around the early 1830s.